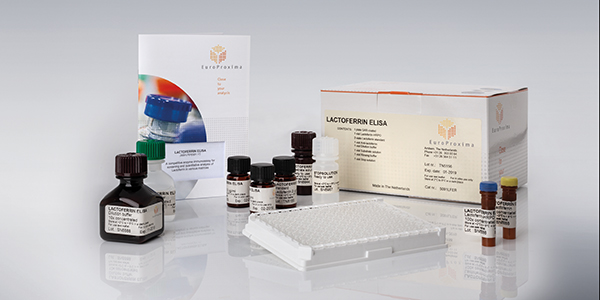 EuroProxima Plus Lactoferrin is a competitive enzyme immunoassay for screening and quantitative analysis of lactoferrin in various matrices.

Lactoferrin (LF) is an 80 kDa glycoprotein of the transferrin family capable of binding and transferring iron (Fe3+ ions). It is expressed in most biological fluids and is a major component of the mammalian innate immune system. Its protective effects range from direct antimicrobial activities against a large panel of microorganisms, including bacteria, viruses, fungi and parasites, to anti-inflammatory and anticancer activities. LF is produced by mucosal epithelial cells in several mammalian species and is found especially in milk, making it the second most abundant protein in milk after caseins. The concentration of LF in milk varies from 7 g/l in colostrum to 1 g/l in mature milk.
Lactoferrin plays a key role in the defense mechanisms of lactating animals’ mammary glands.The milk lactoferrin concentration is a helpful indicator for the stage of lactation, for mastitis and for intramammary infection in dairy cows.