Recently, there have been a number of oyster recalls due to Norovirus contaminations. But what actually are noroviruses, what are sources of contamination and how can the viruses be detected?

Norovirus is a very contagious virus, which occurs around the world and usually causes gastrointestinal problems. The pathogens are excreted in high numbers in the patient’s feces and vomit and are highly contagious. Thus, there often are bigger breakouts of diarrhea and vomiting in community facilities, such as nurseries, schools, seniors’ residences or hospitals.

How do noroviruses spread?

Noroviruses are generally spread by contact infection from person to person. The pathogens are distributed on in little traces of fecal matter or vomit from patients on the hands. From the hand, the viruses will easily enter the mouth. Tiny virus-containing droplets in the air that occur during vomiting are highly contagious as well.

Noroviurs may adhere to objects such as door handles, handrails or fittings and can easily reach the mouth via the hands.

Raw foods, such as salads, fruit (including frozen berries, for example), crab or shellfish may be contaminated with noroviruses and cause infection, as well as contaminated water and other beverages. Howerver, the main source are contaminated bivalve molluscs (such as oysters) consumed raw or undercooked as well as fruit and vegetables (Figure 1).[vc_row_inner][vc_column_inner width=”2/3″]

The burden of Norovirus

According to the CDC, each year, on average in the United States, norovirus causes:

Definition: An outbreak of norovirus is defined as an occurrence of two or more similar illnesses resulting from a common exposure that is either suspected or laboratory-confirmed to be caused by norovirus.

Norovirus illnesses and outbreaks are typically more common in cooler winter months, also called the “winter vomiting bug”. The majority of all outbreaks occur from November to April in countries above the equator (Figure 2), and from May to September in countries below the equator. However, in places closer to the equator, norovirus may be less seasonal.[vc_row_inner][vc_column_inner width=”2/3″] 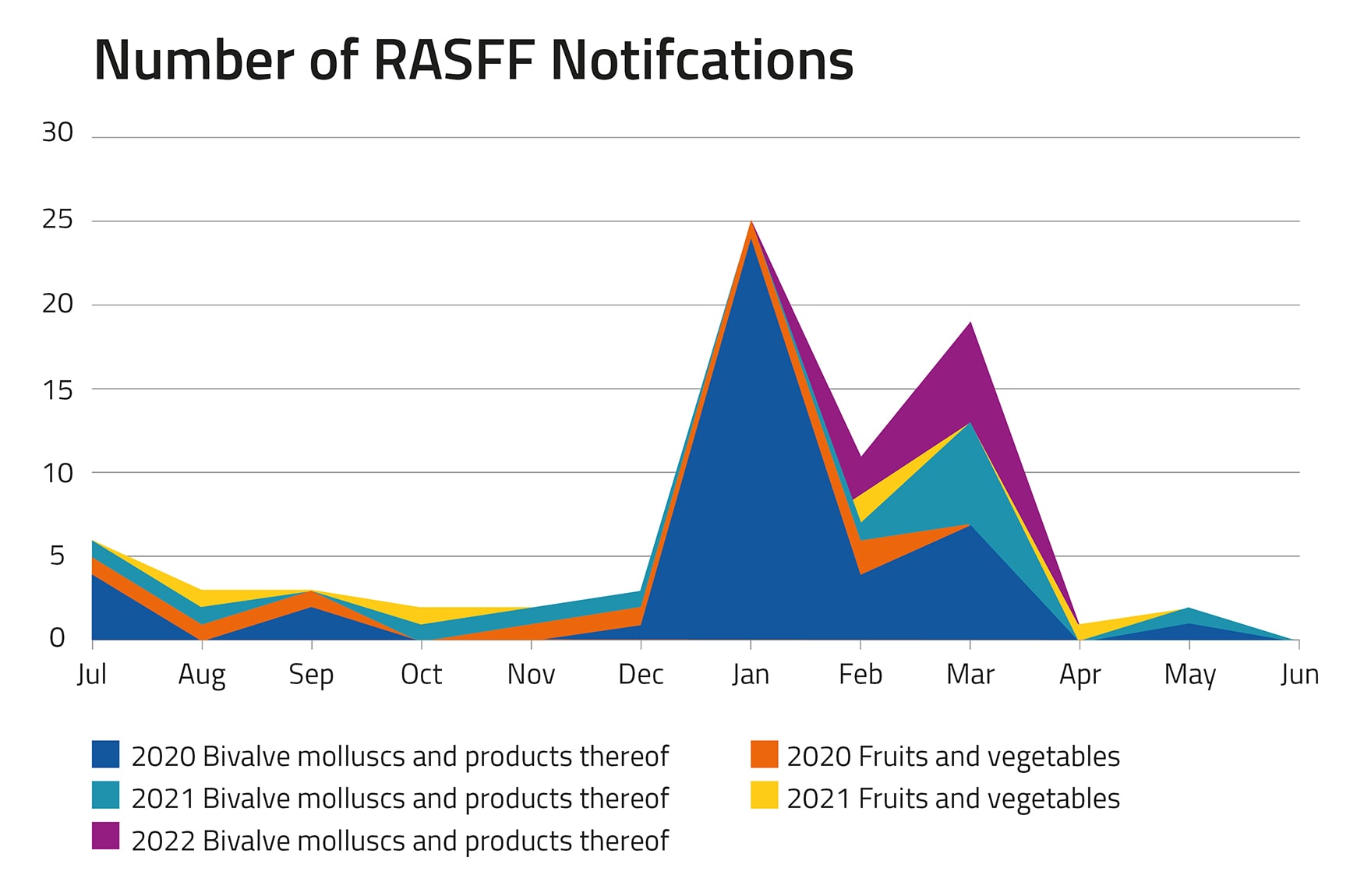 Globally, about one out of every five cases of acute gastroenteritis (inflammation of the stomach or intestines), that leads to diarrhea and vomiting, is caused by norovirus.

Being the leading cause of acute gastroenteritis in both low- and high-income countries, Norovirus annually causes:

Every year, norovirus is estimated to cost $60 billion worldwide due to healthcare costs and lost productivity

How are viruses in food detected?

The standard method for the detection of viruses in food is PCR. The major difficulty of detecting virus contaminations is that food often contains only very small virus quantities – which, however, can already cause an infection and must therefore be detected reliably. In addition, it is desirable to test not only food but also water and surfaces. A real-time PCR test that meets these requirements and that is capable of detecting norovirus and hepatitis A simultaneously, is SureFast® Norovirus/Hepatitis A 3plex (Art. No. F7124).

Do you have further questions concerning foodborne viruses? We will be happy to support you!Sources: