The ongoing risk of Listeria

Listeria monocytogenes is frequently associated with the most severe outbreaks in terms of hospitalisations and deaths. In 2021, Listeria outbreaks included fresh produce, cured meats, ready to eat chicken products as well as cheese. 18 outbreaks of infections were traced to bagged salads and led to a recall of more than 200 varieties of bagged salads. 2,320,774 pounds of pork and pepperoni products and 8,492,832 pounds of ready-to-eat chicken products were recalled for (possible) Listeria contamination.

Here are 5 facts about the pathogenic bacteria listeria you need to know when working in food production.

Bacteria of the genus Listeria are ubiquitous in the environment and can be found in soils and plants, but also in the intestinal tract of animals and humans. They can get into foods through feces or the environment, during processing or already during harvesting, milking or slaughtering. Foods which are particularly vulnerable include meat, fish and dairy products, but also convenience food such as pre-sliced fruits, ready-to-eat salads or ready meals.

The human-pathogenic species Listeria monocytogenes can survive in environments which are unfavorable to other microorganisms. The bacteria can survive freezing as well as drying. In addition, they need very little nutrients and can multiply even at low temperatures and low oxygen levels – for example in vacuum packaging in the refrigerator. Some types of listeria can even resist alkalis. However, the bacteria can be killed by cooking, baking, sterilizing and pasteurizing.

Listeria can cause listeriosis, a notifiable infectious disease. The infectious dose is relatively low; 1000 cells are sufficient to trigger an infection. In healthy humans, the infection is harmless and may not even be noticed. However, it may cause a lethal sepsis or meningitis in infants, pregnant women, older and immunocompromised people.

4.   Listeria are not easy to detect

Symptoms of listeriosis may not occur until several weeks later. This makes it difficult to trace the source of a contamination. Until the source is found, the bacteria may already have spread to further products or facilities.

Listeria can form biofilms which can hardly be removed. Thorough cleaning, even in production areas that are difficult to access, is therefore particularly important. It should also be noted that certain processing steps might be favorable for the growth of listeria – for example, condensation water is a major risk in food production. 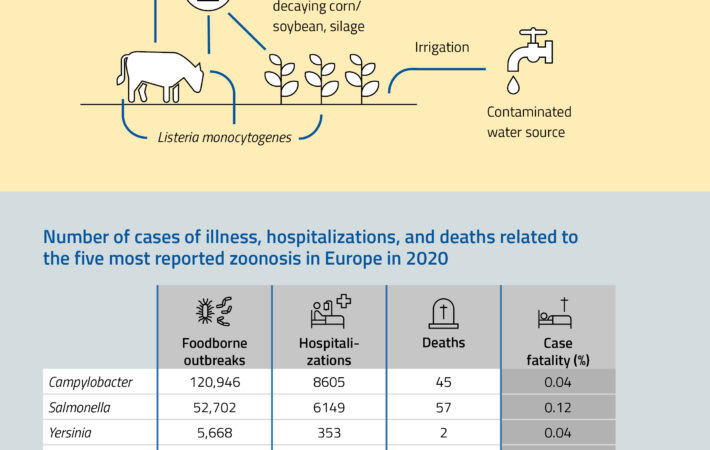