DON: How contaminated is our grain?

Moldy bread is easy to recognize for the consumer. But mold can already develop in the field and contaminate the harvest. More dangerous than the mold fungus itself are the toxins it produces, the so-called mycotoxins. One of the most prevalent mycotoxins is deoxynivalenol (DON).

Mycotoxins such as deoxynivalenol are a problem for global agriculture – and a health hazard. It is estimated that a quarter of the food produced worldwide is contaminated with mycotoxins. The fungal toxins can have toxic effects even in low concentrations and cause both acute and chronic damage. Currently, several hundred types of mycotoxins, produced by different mold fungi, are known. Deoxynivalenol is a mycotoxin from the group of trichothecenes and is produced by molds of the genus Fusarium. We have summarized what you should know about this toxin.[mk_title_box font_family=”none”]How prevalent is DON?[/mk_title_box]DON is the most common mycotoxin in Europe and North America and is regularly found in cereals such as wheat, barley, oats and corn. However, the spread of molds depends on climatic conditions and varies from region to region and from year to year. Changeable weather with a lot of precipitation during the cereal flowering promotes the growth of mold. In 2016, for example, very high DON concentrations occurred in Central Europe. The EU limit values were exceeded several times in some regions. In the following year, the Scandinavian countries were particularly affected. No predictions can yet be made for the 2020 harvest – but the spring, which was very wet in many places, could probably leave its mark.[mk_title_box font_family=”none”]How dangerous is DON?[/mk_title_box]DON has many toxic effects: it can cause acute intoxication, which manifests itself through nausea and vomiting – which earned it the nickname „vomitoxin“. Moreover, it has immunosuppressive and cytotoxic effects and can cause kidney problems. In animals fed with contaminated feed, DON can lead to loss of appetite, growth retardation and an increased susceptibility to infections. Pigs are particularly sensitive to the toxin.[mk_title_box font_family=”none”]What are the legal regulations?[/mk_title_box]In order to avoid a health hazard for humans and animals, most countries have set limit values for the mycotoxin content in food and feed. The following table shows the maximum levels applicable in the EU.

The comprehensive regulation requires detection methods for mycotoxins. Here, many companies have a particular need for rapid tests with which the mycotoxin content of the grain can be tested directly on delivery. On-site analysis with quantitative results in only 3 minutes is possible using the RIDA®QUICK DON RQS ECO rapid immunochromatographic test in combination with the RIDA®SMART APP. 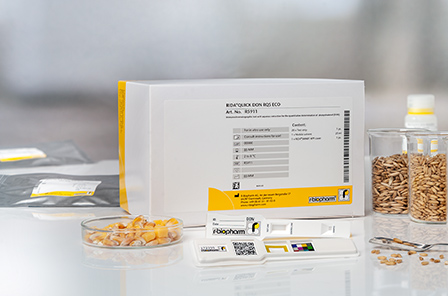